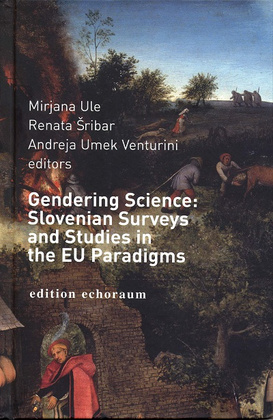 Gendering Science: Slovenian Surveys and Studies in the EU Paradigms « Back

In the 1990s there was a rise in interest in the position of women in science in Europe, especially the gender (im)balance in academic and scientific careers. While access to science in schools and universities has been improved for both women and men, access to scientific careers is still difficult for women. Even though in Slovenia in 2010 the shares of both genders at the level of postgraduate studies were nearly equal (the share of women was 51%), and the share of women at the PhD level was still 46%, the share of women researchers had fallen to 31%, while the share of women at the highest career level (full professors) had dropped further to a modest 20% … More gender-balanced science and technology would contribute to social progress. Securing equal rights for women and men in science is also a question of a just society. Hence, the central thesis of the monograph, which in one way or another is present in all the contributions in this book, is that ensuring the conditions for gender equality in scientific work is one of the key components of the internal democratisation of science.